A six year old girl steps up on the wooden platform, looks around, puts her hands on her hips and her nose in the air, and declares “It’s not a real stage.”

Curiosity gets the better of me.

20 minutes later the “stage” is packed with kids at the nightly dance party.

And she ends up having a really good time.

Because I’ve heard all the excuses.

“The room was packed.”

“The room was empty.”

“I already knew everyone.”

Every reason it’s not a “real” opportunity.

Any time you talk to someone.

To start a conversation.

To make a connection.

That leads to leads.

Here are 3 ways to seize opportunities:

Other than your business.

Practice not mentioning your business.

If they don’t ask.

Networking events are for starting conversations.

What question starts your best conversations?

Some go to talk about themselves.

Seek out the former.

Politely shake hands with the latter.

Tell them it was nice meeting them.

And find someone who wants to network.

If you can’t get a word in edgewise.

What do you talk about at networking events?

Networking is about starting business relationships.

What’s your definition of networking success? 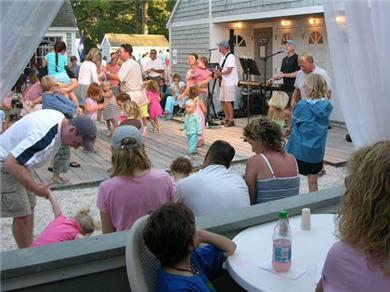