A little green roadside sign grabs my attention two weeks ago even though I have no intention of bringing my wife and sleeping 2-year-old and 3-year-old to a pub on our way back from Story Land on Route 16 South in New Hampshire.

You see, it all starts 8.3 miles earlier.

With a big billboard.

On the side of the road.

At the time, I could not be a worse prospect for a pub.

The girls are sleeping.

And we have a long drive ahead of us.

But the name is catchy.

As is the tag line.

Poor People’s Pub.
Nothing fancy!
Just good grub.
8.3 miles ahead on the left.

Announcing the turn for the Poor People’s Pub.

I find myself wistful.

As though I’m passing up the chance.

To spend time with a good friend.

I have never heard of the Poor People’s Pub.

And certainly never intended to go.

Is the business networking equivalent

And then wondering why no one takes the turn.

Just not for first timers.

You have to start the relationship earlier.

So that by the time you arrive at the event.

That’s the value in business networking.

You make an impression.

So that the next time people see you.

How do you start relationships? 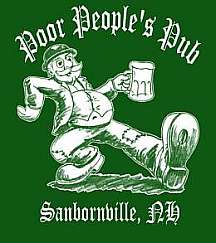